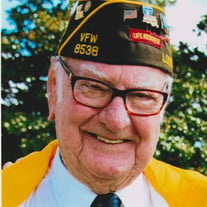 Weston “Coon” Smith, 95, a native of Galliano and resident of Cut Off passed away on Sunday, January 17, 2021. On Wednesday, January 27th, 2021, Military Honors will be held at Sacred Heart Catholic Church in Cut Off at 11:30 am followed by Funeral Mass at 12 noon with burial following in the Church Cemetery Mr. Weston is survived by his wife of 74 years Doris Richoux Smith, children; Debra S. Rebstock (Gary) and Toni S. Barrios (Randy P.), grandchildren; Jack Rebstock (Sharell), Sammy Rebstock (Lauren), Ben Rebstock (Casey), Randy J. Barrios (Chris) and Ryan Barrios, great grandchildren; Grant, Claire, Lynx, and Victoria, brother; Russell Smith, and sisters; Dolores Curole, Amelia Rebstock, Janet Triche, and Rosita Triche. Mr. Smith was preceded in death by his parents; Preslich and Lionelle Duet Smith, brother; Colin Smith, and sisters; Thelma Galjour and Alma Adams. WESTON J SMITH 1-27-21 Weston lived a long & happy life. He lived to be 95 years old & was happily married to the love of his life, Doris for 74 years. Paw was proud of many things in his life. He was a: Veteran of WWII, One of the early Navy SeaBees Survivor of the Battle of Okinawa. Boat Captain He had a great love for his two daughters, five grandsons & his four great grandchildren. Weston grew up during the Great Depression of the 30s when times were tough. Being the oldest of the family, it fell upon him to help the family. He went to work at age 5 with his father; oystering & trapping in winter and trawling in Summer. His Daddy put him behind the wheel of the boat & told him to keep the boat going straight or else. Doing so helped his family survive. Five year-old Weston did it, all the while missing his Mama like any child would. He had a 9th grade education but was a very successful Mariner, working for Halliburton for 34 years as a Cement Boat Captain. Everyone knew ‘”Coon Smith” and he knew everybody. His Service during World War II was so intense that, like many Veterans, he would not talk about it until his last years. We know it was intense because it gave him nightmares most of his life. However, because he spoke French & English he was of great benefit as an interpreter to his fellow Cajun soldiers who spoke no English. Just as everybody knew “Coon Smith” at Halliburton everyone during the War knew “Frenchy Smith”! He had an astonishing memory, and served as the Smith, Duet & Richoux family’s un-official Genealogist. He knew all the family connections, where they lived, who did what for a living, & who was married to who. Friends & relatives would often call him to find out about family connections. His niece called him a “Social Butterfly” because he would fly around the neighborhood & community visiting people, interacting with them, joking with them. When he met a stranger, within a minute or two, he would know who he or she was & could tell them their genealogy for one or two generations. And once you met Weston, you never forgot him. The Corona Pandemic changed all that. It clipped his Butterfly wings. No longer could he “Make the Veillee” with friends & family. Covid-19 may have got him but it, ironically, also gave him back his Butterfly Wings so he could fly again. He got his wish to see his Mama again; is in Heaven with her, his Daddy, his brother, his sisters & all his friends. Now he’s free to fly around and “make the Veillee” with family & friends and to make new friends in Heaven. No more painful knees or old age to limit him! Rest in Peace Paw, your work here is done!! Services by Samart-Mothe Funeral Home.

The family of Mr. Weston Smith created this Life Tributes page to make it easy to share your memories.

Weston “Coon” Smith, 95, a native of Galliano and resident of...

Send flowers to the Smith family.