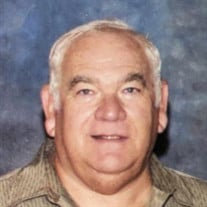 Welton J. Curole, 72, a native and resident of Cut Off passed away on Thursday, April 15, 2021. Visitation will be held at Samart-Mothe Funeral Home in Cut Off on Friday, April 16th from 5:00 p.m. until 9:00 p.m. and resume on Saturday at 8:00 a.m. until 10:30 a.m. A Mass of Christian Burial will be celebrated at 11:00 a.m. at Sacred Heart Catholic Church with burial to follow in the church cemetery. Welton is survived by his wife of 49 years, Glenda B. Curole; son, Bryan D. Curole (Susan); grandchildren, Caroline Curole, Elizabeth Curole and Jacob Curole. Welton was preceded in death by his parents, Jessie and Hilda Curole; brother, Curtis Curole; sister-in-law, Enola M. Curole. ​Welton was a South Lafourche educator and coach. He taught at Galliano Jr. High and South Lafourche High School for 33 years. An avid sportsman, he coached football, basketball, and track, including a state championship in football in 1997. Instrumental in providing computer technology to the South Lafourche area, he was a pioneer in setting up computer programming at South Lafourche. As a business educator, he established the school to work program at South Lafourche. Also involved in the LACUE business program, he shared his knowledge on both parish, state and national levels. He in-serviced many educators on computer technology. Retired for 16 years, Welton loved sports, fishing, and family vacations. He took special pride in his grandchildren and their achievements. He was a gentle giant of a man dearly loved by family and deeply respected and loved by students and friends. Samart-Mothe Funeral Home entrusted with arrangements.

The family of Mr. Welton Joseph Curole created this Life Tributes page to make it easy to share your memories.

Welton J. Curole, 72, a native and resident of Cut Off passed...

Send flowers to the Curole family.