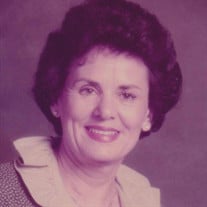 Thelma F. Alario, 91, a native of Raceland and resident of Cut Off passed away on Saturday, December 19, 2020. A Mass of Christian Burial will be celebrated on Wednesday, December 23rd at 11:00 a.m. at Our Lady of Prompt Succor Catholic Church with burial to follow in the church cemetery. Thelma is survived by her husband of 73 years, James G. Alario; daughter, Robin Alario (Buddy) ; son-in-law, David Gravois; grandchildren, Reggie Ougel (Martha), Andrea Warner (Thorne) and David J. Gravois (Erin) ; great-grandchildren, Alli Rae Ougel and Thorne David Warner; sister, Patsy F. Toups (Donovan) and numerous nieces and nephews. Thelma was preceded in death by her parents, Leo Foret, Sr. and Mathilda P. Foret; daughter, Pamela A. Gravois; brother, Leo Foret, Jr.; sister, Catherine Allemand. Thelma had an active lifestyle having served as president and treasurer of American Legion Auxiliary Post 259. She was a Girl Scout and Brownie Leader. She helped organize and serve as the first president of the Ladies Tideland Golf and Country Club. Thelma was also very involved in church ministries. She was a CCD teacher, worked with the RCIA process and was a member of the Ladies of LaSalette. She was also the first woman to serve on the church council of Our Lady of Prompt Succor where she was a lector and minister of the cup. Thelma served as a coordinator with Focus which was a program used to prepare couples for marriage and was very active in the Cursillo movement. She helped organize the Catholic Community Center where she was on the board of directors for many years and served as President for five years. During her husband’s banking career, she served on many banking committees. In 1991, Thelma was the recipient of the Community Service Lifetime Achievement Award presented by the Chamber of Commerce. Thelma enjoyed being with her family and playing Pedro with her friends. She loved helping people and she never met a stranger. The family would like to extend special thanks to her caregivers, Stacy Eymard, Sandy Culpepper, Annette Slade, Emily Guidry and the staff of Journey Hospice. Samart-Mothe Funeral Home entrusted with arrangements.

Thelma F. Alario, 91, a native of Raceland and resident of Cut Off passed away on Saturday, December 19, 2020. A Mass of Christian Burial will be celebrated on Wednesday, December 23rd at 11:00 a.m. at Our Lady of Prompt Succor Catholic Church... View Obituary & Service Information

The family of Mrs. Thelma Foret Alario created this Life Tributes page to make it easy to share your memories.

Thelma F. Alario, 91, a native of Raceland and resident of Cut...

Send flowers to the Alario family.