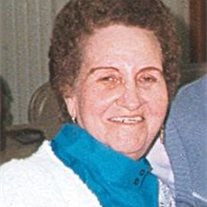 Neatie S. Knight, 96, a native of Gheens and resident of Raceland, passed away on Monday August 13, 2012. Visitation will be held at St. Hilary of Poitiers Catholic Church on Friday from 9am until funeral time. A mass will be held at the church... View Obituary & Service Information

The family of Neatie S. Knight created this Life Tributes page to make it easy to share your memories.

Neatie S. Knight, 96, a native of Gheens and resident of Raceland,...

Send flowers to the Knight family.