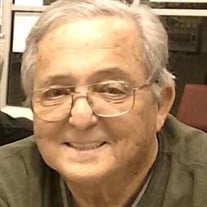 Jessy Martin, 79, a native of Cut Off and resident of Thibodaux passed away on Wednesday, August 12, 2020. Jessy is survived by his wife Elizabeth Martin, brother Johnny Martin (Michele), son David Martin (Cindy), daughters Jessica Dufrene (Robby), Ann Rieth (Michael), Jennifer Blanchard (Greg), grandchildren Elizabeth, Jessy, Adam, Abraham, Gavin, Beau, Lila , Jake, and numerous beloved nieces and nephews. Jessy is proceeded in death by his father Morris Martin, mother Loridia Martin, brother Elson Martin, sisters Audrey Martin, Enola Curole, and Mary Ann Martin. Jessy was a lifelong educator. He served as an elementary school teacher, Assistant Principal, and then Principal at Galliano Jr. High and (later) Elementary for 35 years. Jessy was an accomplished artist and a dedicated member of Les Artistes du Bayou and Terrebonne Fine Arts Guild. He also served on the Lafourche Ambulance District #1 Board for over a decade. Mr. Martin touched countless lives with his kindness and respect for others. A funeral mass will be held at Sacred Heart Church in Cut Off on Thursday, August 20th at 10:00 AM. The Martin family would like to thank the staff of Thibodaux Regional for years of kindness and care and all the family and friends for their undying love and support. In lieu of flowers, the family asks for continued prayers for Mr. Jessy and family.

The family of Mr. Jessy Paul Martin created this Life Tributes page to make it easy to share your memories.

Jessy Martin, 79, a native of Cut Off and resident of Thibodaux...

Send flowers to the Martin family.