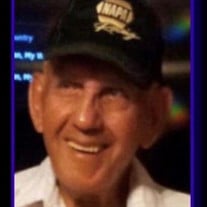 Jacques &#8220;Pappie Jack&#8221; Billiot, 90 a native of Golden Meadow, La. and resident of Cut Off, La. passed away on Saturday April 11, 2020 with his loving family at his side. A Memorial Service will be held at a later date. Jack is... View Obituary & Service Information

The family of Mr. Jacques "Pappie Jack" Billiot created this Life Tributes page to make it easy to share your memories.

Send flowers to the Billiot family.