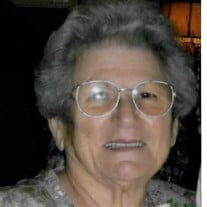 Ella Mae Dupre, 83, of Larose died August 3, 2021, with her beloved family at her side. Miss Ella was born December 24, 1937, in Little Calliou, Louisiana to the late Ellis and Justillia Dupre. She later met the late Maxime Danos and was married.... View Obituary & Service Information

The family of Mrs. Ella Mae Dupre created this Life Tributes page to make it easy to share your memories.

Send flowers to the Dupre family.