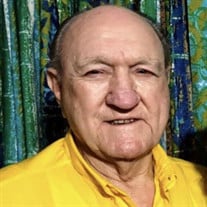 Easton Joseph Pitre, a lifelong resident of Golden Meadow, left this earth for enteral life with his Creator, on May 13, 2020 at 11:15 P.M. He is survived by his wife of 60 years, Mildred Cheramie Pitre; son, Jed Michael and daughter-in-law, Robbin; two granddaughters, Andree’ Margaret Long (Brian) and Emilee Lynne Guidry (Taylor); great-grandsons, Brayson Long and Henry Guidry; great-granddaughter, Heidi Nicole Guidry and future great-grandbaby, Long and a number of nieces, nephews, cousins and godchildren. He was 87. He was preceded in death by his parents, Dumas J. and Helise Plaisance Pitre; sisters, Josephine (Phin) P. Guidry (Herman), Lorida (Bab) P. Serigny (Margloris), Lorita (Poon) P. Falgout (Albert); brothers, Dumas “John” (Alzina “Lasur”) and Edward (Regina); paternal grandparents, Voltaire and Laura Toups Pitre; maternal grandparents, Olivier and Cecelia Bouvier Plaisance. He was also preceded in death by his foster parents of 25 years, Horace and Dumacia Pitre Dantin, adopted foster sister, Geraldine Dantin Naquin of Pointe Aux Chenes, foster sisters, Victoria D. Smail (Harold) of Ellenton, FL, Earline D. Wasko (Roy) of Dickerson, TX and great-granddaughter, Haylee Marie Guidry. As an employee of 34 years with the Lafourche Parish School System, Pitre served as teacher/coach at Golden Meadow High School, South Lafourche High School’s first assistant principal, staff supervisor in transportation, finance, insurance and data processing, and retired as system superintendent in 1988. His service to the school system was interrupted twice, once to serve his country in the U.S. Army for two years and again to further his studies. The local chamber selected Pitre for its first Lifetime Achievement Award in Education in 1992. He was a board member of the Louisiana Association of School Superintendents-Retired, member Lafourche Parish Retired Teachers and Louisiana Retired Teachers. Pitre served his home church parish, Our Lady of Prompt Succor, on its first parish council for 8 years and later for another 6 years term, serving as vice-president and president. He was an original lector and commentator for masses, member of the finance committee, chairman of the church’s Bull Club Fair as its first Super Bull, chairman of the Vocations committee for 11 years and was a member of the Holy Name Society. In 1991, he received a papal honor, Pro Ecclesia et Pontifice medal, from Pope John Paul II. Pitre was a dedicated member of the Knights of Columbus, serving as Grand Knight of Council #3150 of Cut Off and Faithful Navigator of St. Pius X Assembly of the 4th degree. He was a charter member of Council #3743 of Baton Rouge and Council #9000 of Golden Meadow, where was currently a member. He served the State Council as chairman of numerous state committees from 1973 to 1982, State Secretary, 1982-84 and State Deputy 1984-86 and was appointed to serve as Master of the Louisiana District of the 4th degree 1988-90. Pitre joined the knights in 1953 and became a 4th degree in 1956. He was awarded with the Order of Merit from the Louisiana District 4th Degree in 2019. Pitre was invested into membership for the Order of the Fleur de Lis, a Catholic fraternity of five states-LA, ARK, TN, ALA, MS- in 1991. He served as Grand Almoner from 1991-1997 and Vice Grand Chancellor from 1998-2003. In 2016, the Board of Governors named him an Honorary Life Member. His community received his service, three terms on the board of Tidelands Country Club, twice as president, co-founder of the Golden Meadow Kids Basketball program. Member of the town’s Zoning Commission, 24 years with the recreation department, charter chairman of Lafourche Parish Crimestoppers, and as a fundraiser for the Cystic Fibrosis Foundation, and was a member of American Legion Post 259. Pitre’s family, church, country and vocation were his priorities, but his love for LSU was never questioned. After graduating from LSU’s Nicholls Junior College, he attended the university in Baton Rouge where he received three degrees. He made all football games, home and away, all home basketball games, some away, most home baseball games and attended periodically for other LSU sporting events. He was a member of the LSU Alumni Association, Tiger Athletic Foundation, LSU Gridiron Club, LSU Golden Tigers and Bayou Bengals Tigers. He enjoyed traveling, having been to all 50 states and 15 countries. A private graveside burial will be held at Our Lady of Prompt Succor Catholic Church in Golden Meadow with Father John Nambusseril presiding. A memorial service will be held at a future date to celebrate his life. In lieu of flowers, donations to the Cystic Fibrosis Foundation, Our Lady of Prompt Succor Catholic Church in Golden Meadow for masses in his name or the Bishop Greco Foundation are preferred. Samart-Mothe Funeral Home is in charge of the arrangements.

Easton Joseph Pitre, a lifelong resident of Golden Meadow, left this earth for enteral life with his Creator, on May 13, 2020 at 11:15 P.M. He is survived by his wife of 60 years, Mildred Cheramie Pitre; son, Jed Michael and daughter-in-law,... View Obituary & Service Information

The family of Mr. Easton Joseph Pitre created this Life Tributes page to make it easy to share your memories.