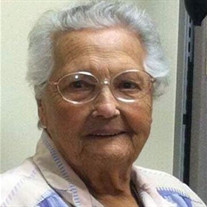 Earline T. Matherne, 90, a native of Cloverly Plantation and resident of Cut Off passed away on Tuesday, July 16, 2019. Visitation will be held at Sacred Heart Catholic Church on Saturday, July 20th from 9:00 a.m. until funeral time. A Mass... View Obituary & Service Information

The family of Mrs. Earline Thibodaux Matherne created this Life Tributes page to make it easy to share your memories.

Earline T. Matherne, 90, a native of Cloverly Plantation and...

Send flowers to the Matherne family.