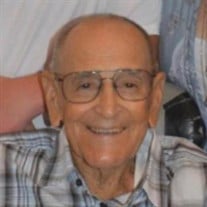 Arthur J. Dufrene, Sr., 91, a native of Golden Meadow and resident of Mathews, LA died on Saturday, April 4, 2020. Private graveside services will be held at a later date in St. Joseph Mausoleum in Galliano. He is survived by his son, Arthur... View Obituary & Service Information

The family of Mr. Arthur J. Dufrene Sr. created this Life Tributes page to make it easy to share your memories.

Send flowers to the Dufrene family.