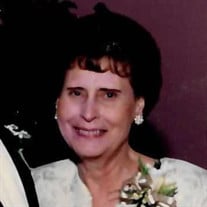 Artamay Thomas Gautreaux, known as Miss Mae, was born in New Orleans on April 20, 1930. She passed away peacefully surrounded by her loving children on April 29, 2021, at the age of 91. Artamay was preceded in death by her parents, Sorolta Thomas Terrebonne and George Thomas and her stepfather, Leneas Terrebonne. She was also preceded in death by her husband, Gerald E. Gautreaux, sister, Joyce Cheramie, daughter-in-law, Sheila Gautreaux and son-in-law, Wayne T. LeBouef. Artamay is survived by her children, Tom, Joan LeBouef, Denise Duet (Ronald), David (Sonya), Lisa Todd (Jim), Julie Calhoun (Andrew) and Rochelle Michell (Patrick), 15 grandchildren and 8 great-grandchildren. Raised by a strong, single mother after her father’s passing when she was only 2 years old, Mae was destined to be a maternal Cajun force - despite her 95-pound, 5’0” frame. That tiny stature certainly didn’t stop her from raising seven children and enjoying her hobbies of crocheting and gardening. Affectionately known as “Granny,” Mae was known to have a serious sweet tooth. Her 15 grandchildren can attest to the ample butter cookies awaiting them on her kitchen counter after her husband, Jerry, cooked up a huge Cajun meal every Sunday after mass for their large family. While it’s true Mae wasn’t known as the cook of her clan, she made the best “plain” spaghetti this side of the Mississippi. And, of course, always made sure Gautreaux Sunday lunches were followed by a strong cup of coffee and, if she was lucky, a slice of cake with a little serving of Blue Bell. While supporting her community, Mae enjoyed volunteering with Holy Rosary’s school fairs, the French Food Festival and with the Ladies Altar Society. A devout Catholic in her 91 years, it was often said Drew Brees fell right below Jesus when it came to those Mae admired. To the very end, when Drew graced her television screen, she’d still find the excitement to say, “That’s him!” Pair a Saints game with boiled crabs and some free time for crocheting in the afternoon, and you have her perfect weekend Sunday. Every new baby was guaranteed his/her own specially-made set of crocheted hangers. The simple pleasures filled her cup the most, including the (very) occasional slot machine fun at the casino. It is often noted that at the end of one’s time on Earth, they tend to reflect on the small, everyday joys that comprise a lifetime. Mae’s children and grandchildren feel there is no better embodiment of this ethos than their New Orleans-raised matriarch; the Saints, a delicious cherry snoball, and simply “going for a ride” created the happiness on which her long life was

Artamay Thomas Gautreaux, known as Miss Mae, was born in New Orleans on April 20, 1930. She passed away peacefully surrounded by her loving children on April 29, 2021, at the age of 91. Artamay was preceded in death by her parents, Sorolta... View Obituary & Service Information

The family of Mrs Artamay Marie Thomas Gautreaux created this Life Tributes page to make it easy to share your memories.

Send flowers to the Gautreaux family.