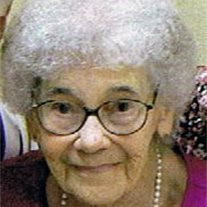 Anita Collins Guidry passed away peacefully at home on June 13, 2012, surrounded by her family. She was born on January 3, 1923, in Golden Meadow, Louisiana, the daughter of the late Marie Gaspard Collins and Hennessey "Henry" Collins. She was preceded in death by two sisters, Olivia and Rita Collins, and three brothers, Emel, Sr., Freddie and Livingston Collins. Anita and her surviving sisters, Rosemary Griffin, Glorice Griffin and Jeanette Eserman, remained extremely close until her death. Anita was married to the late Charles P. Guidry, Jr., and leaves behind her daughter, Janeva Guidry Mercer, and husband, Kenneth Mercer, and son, Livingston C. "Buddy" Guidry, and wife, Phena Guidry. She also leaves behind five grandchildren, Heidi Mercer, Jill Mercer, Ginny Bradley, Bill Mercer, and Amy Welsh, and seven great grandchildren, Kenneth Cheramie, Damian Cheramie, Victor Bradley, Michelle Bradley, Connor Welsh, Aidan Welsh, Brennan Welsh. Anita (Nita) was well known down the bayou as a nurse for Drs. John LeBlanc and John Fischer. She loved her family, the Saints, South LaFourche football, and Mardi Gras. Anita travelled with her bowling friends all over the United States and bowled as far away as Hawaii and New York. For over 50 years, Anita dreamed of finding out the fate of her little brother, Livingston, who went to war at age 17. Her dream was fulfilled in 1996 when she was able to participate in the dedication of a memorial to the servicemen who died in the Rhona disaster in 1943. Visitation will be from 9:30 a.m. to funeral time on Monday, June 18, 2012, at Sacred Heart Catholic Church, Cut Off. Mass will be at 11:30 a.m. at the church with burial in the church mausoleum. Memorial gifts in Anita Guidry's memory may be made to Sacred Heart Church in Cut Off, Louisiana, or the Cut Off Youth Center.

Anita Collins Guidry passed away peacefully at home on June 13, 2012, surrounded by her family. She was born on January 3, 1923, in Golden Meadow, Louisiana, the daughter of the late Marie Gaspard Collins and Hennessey "Henry" Collins. She... View Obituary & Service Information

The family of Anita "Nita" Guidry created this Life Tributes page to make it easy to share your memories.

Anita Collins Guidry passed away peacefully at home on June 13,...

Send flowers to the Guidry family.